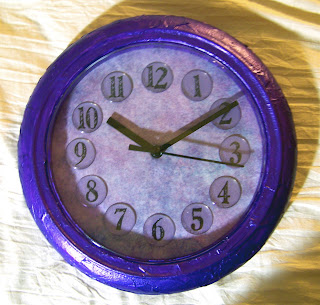 There are three kinds of teachers:

1. The teacher who looks at an ugly or boring object in her classroom - in our example, a clock - and thinks, "Yuck. They really should buy us nicer clocks." Which she knows "they" won't do, so she ignores the clock for the rest of the year.

2. The teacher who looks at that clock and thinks, "Yuck. I'm going to buy us a nicer clock."

3. The teacher who looks at that clock and thinks, "Yuck. Warm up my glue gun. There's work to be done."

Yeah, I'm a #3. If you are too, you understand why I come home after working 10 hours and then work three hours on projects like this one. 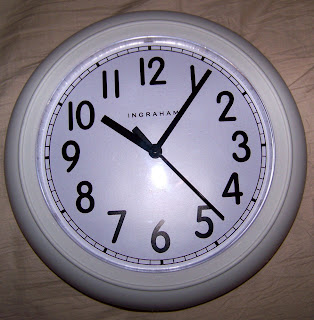 Which clock to choose? I've actually done this project several times, and the best clocks I've found are the cheapo ones from Wal-Mart. These are plain, round plastic clocks that come in various colors. Usually, they're attached to the packaging with screws, which is very annoying. Almost any clock will work, though - just take a look at it first and see if you can work out how to disassemble it, since that's what we're going to do first.

This tutorial assumes you have a cheap Wal-Mart clock, probably one of those "Mainstays" ones in the blue box. You can probably figure out how to get the same result with other types of clocks. 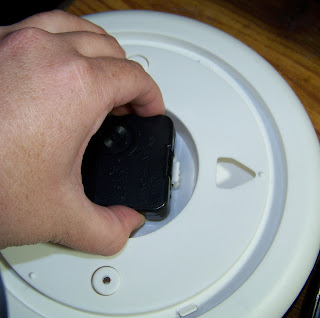 1. Remove the clock from the packaging and flip it over. You should see a square black box with a space for a battery. Insert your battery and make sure the clock works. You don't want to spend a whole bunch of time on something that's defective, right? Now, remove the battery and look at how the clockworks are attached. On most cheap clocks, it will be held on with two plastic clips. It's pretty easy to stick a flat tool, like a screwdriver, behind one of these clips to push it back and remove the box. Pull it straight out. When you do, the clock hands on the other side will fall off. This is okay. 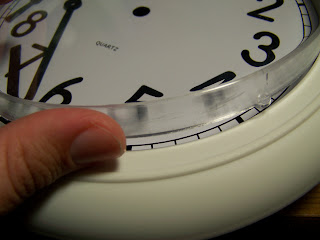 2. Next, we're going to remove that clear plastic over the face. You will probably find that the plastic is attached to the casing with three tabs. Stick your screwdriver between the clear plastic and the casing, right at one of the places where the tabs are. Gently push in and up, and it should slide right out. Don't worry if you break any of the little tabs in the process. You can always just glue the clear face back in if you have to.

Set aside the clear plastic and the clock hands for now.

3. The fun part! Pull out the ugly clock face. Don't destroy it; you need it for the next step. Note where the "12" was and mark that spot on the case. (Usually the clock face has a tab to hold it in at the position of the 12, 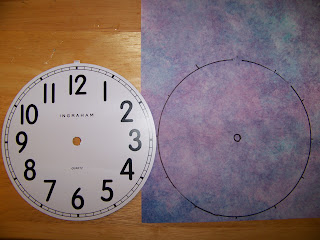 so you may not need to mark it.) Get yourself a pretty piece of scrapbook paper. Trace your clock face onto this paper, and make marks for each hour. Don't skip this step; it helps a lot later on. Don't forget to trace the hole in the middle.

Now you'll want to add numbers to your new clock face. There are lots of ways to do this. What I did was print out nice numbers onto paper of a coordinating color. Then I applied a clear, round epoxy sticker over each number for a 3-D effect. You can get these stickers at any store that sells scrapbooking supplies, and they come in lots of sizes. The ones shown are 1" in diameter. After pressing firmly, cut carefully around each sticker.

Glue the numbers into place. This is where those hour marks will help. Leave about 1/2" between each number and the edge of the face. Allow the glue to set and then cut out the clock face, including the hole in the middle. Set it aside for now. 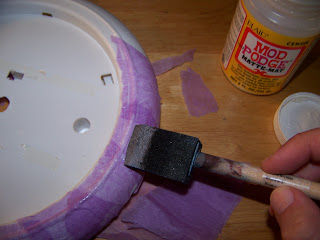 4. Now we're going to alter the case itself. Because plastic resists most paints, I have a unusual method of adding color. What you'll need to do is use the Mod Podge to adhere a layer of tissue paper to the frame around the clock. Use thin layers of Mod Podge and small pieces of paper. You're basically decoupaging here, so go right over the tissue paper too.

5. Allow the decoupaged clock case to dry. Now it should accept acrylic paint, so have a ball! I used Lumiere metallic paint in Pearl Violet. Paint right up to the edge of the clock face.

Also, paint the inside ridge of the clear cover. Since it's not going to be touched once the clock is reassembled, no surface preparation is necessary. This prevents the unpainted white edge of the clock face from ruining the effect.

6. Allow everything to dry completely. Then use several pieces of double-stick tape to affix the new clock face into the case. You don't want to use glue, since it may buckle the paper. Make sure your "12" is at the original top of the clock. And don't put the clear plastic back yet!

7. Re-insert the clockworks into the back of the clock, and put the hands back on. If you want, you can embellish the hands.

8. Get the clear plastic part, align the tabs with the holes, and press it back into place.

It's interesting to see just how permeant memory has become in our everyday lives. It's like everytime I turn my head, I see something with a card slot or USB jack, lol. I guess it makes sense though, considering how cheap memory has become as of late...

Gahhhh, who am I to complain. I can't get by a single day without using my R4 / R4i!

I really admire this, I mean it really looks interesting! Very nice research. Thanks to the author.

I saw so much worthwhile material here!

To know more about Chief Dr Lucky you can visit his website (https://chiefdrluckyherbaltherapy.wordpress.com/)

A friend that suffered from Herpes and was cure with the help of this great herbal doctor Chief Lucky so i decided to contact him for help in getting rid of my families genital herpes virus 1/2 which i did and all i was told to provide was just some useful information and some materials used in preparation of the natural cure and that i did and now i am the happiest person on earth because i am writing this testimony of mine with joy and happiness in my heart to the whole world to know that natural remedy is real because i am a living testimony of Chief Lucky traditional herbal cure and i want you all to contact Chief Lucky via his email: chiefdrlucky@gmail.com or WhatsApp him +2348132777335 am sure he will help you too.